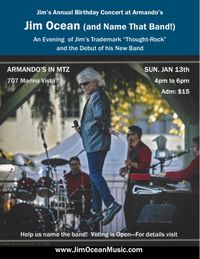 Jim Ocean (and Name that Band)

Mark your calendar and come on down to Armando's in Martinez for an evening of Jim Ocean's trademark “thought rock”.

Expect a spicy mixture of original tunes--serious to humorous, moving to irreverent--as Jim (and his new band!) pay musical tribute to Scorpio's turning of another year.

Cast your "Name that Band" vote at https://docs.google.com/forms/d/1tB0YWFGMI06iCuh-GzRjpHQK7yBkOW4gUWoNK3WnqNo/edit

Portions of this concert will be filmed to create a promo video. Plus . . . "Name that Band" festivities and chocolate cake for all!